A 3Dconnexion SpaceNavigator 3D-mouse is said to greatly enhance 3D-software. Blender is specifically mentioned on the company’s website as ‘Certified’ for their 3D-mice and 3DxWare Mac software. Using a 3D-mouse and a 2D-mouse or Wacom pen at the same time is called ‘Two-Handed Power Mode (video)‘ by Nathan Letwory. You can rotate your object with the 3D-mouse with one hand while rotating it and zooming in and out with the other using a mouse or Wacom pen. Another example is to orbit the object while selecting planes. This seems to work fine with Windows, but not in the Mac OS version of Blender (I tested version 2.77).

This type of view is called Object Mode, because the object is the center of your movement axis. It’s the default view in Google’s SketchUp and the 3DxWare demo software.

Object Mode is the opposite of Camera Mode, where the view reacts as if you were in a First Person Shooter: The 3D-mouse moves the point of view instead of the object.

In Blender the SpaceNavigator can only be used to manipulate the view in Camera Mode / ‘First Person Shooter Mode’: You can move your point of view, but not the object you are looking at. Some people have no problem with this approach, but for me it is quite a deal breaker.

For quite a while it seemed that this would break Two-Handed Power Mode for Mac users, because it is impossible to manually keep your object centered in the screen while working on it. Blenders online manual doesn’t have any information at all about 3D mice. The 3Dconnexion Mac OS X forum features a promising titled topic ‘Got problems with Blender? Read here.‘ but it doesn’t offer a fix. Since it started september 22nd, 2007 it was viewed over 67,000 times. This makes you wonder how dedicated to their 3D mice 3Dconnexion really is.

The only forum topic that is more populair is titled ‘What app would you like to see supported on Mac OS X?’. This speaks volumes and is understandable because while on one hand the forum leaves users in the dark about whether Blender is supported by 3D mice at all on the Mac, the support for other applications is quite limited.

The 3Dconnexion Help app is not very helpful either. It doesn’t explain much, other than the most obvious functions. It has a search function that doesn’t find any key word at all, even the ones that are on the page you are looking at.

I had a feeling there was more to it, so I searched for days on YouTube, the Blender and SketchUp forums and the rest of the ‘net, hoping to find more. I must say that I rarely encountered a subject that is so undocumented.

Still, with the CTRL key pressed and an object selected, the SpaceNavigator can indeed be used by Blender in Object Mode. It’s not possible to set it as the default view though, so you’ll always have to use the CTRL key. Except when you want to pan left or right; then you need to press SHIFT instead.

The necessity to keep buttons pressed in order to use the 3D mouse is quite a deal breaker. It means you’ll have to take your other hand of your ‘regular’ mouse or lay down the tablet pen you are using every time you want to orbit. This spoils a lot of the whole idea of the 3D mouse, which is to ease the strain of hours of computer work on your hands, not to make it worse.

Here’s a video of Nathan Letwory proving the SpacePilot works with Blender on Mac, simultaneously using a tablet and a 3D mouse:

Other solutions that were offered, but didn’t work for me

A salesperson from 3Dconnexion blamed Apple, saying the OS X underpinning don’t support 3D-mice the way Windows does, making it hard for 3Dconnexion to write drivers. This may be relevant, but on the other hand Google and others have succeeded in implementing their 3D-mice in Object Mode on Mac OS X. The 3DConnexion demo software works fine in its default Object Mode View. So the device itself or the OS X drivers don’t seem to be the bottleneck.

Also, Blender ‘sees’ the 3D-mouse input and it works fine in Camera Mode view. Blender ignores any personalized OS X 3DxWare driver preference pane settings though and that doesn’t make it easer to set up the 3D mouse, but that’s not the real problem. 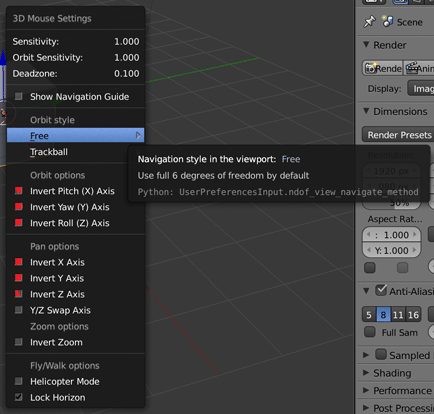 When I asked my webshop vendor to take back the 3D-mouse, 3Dconnexion contacted me. After the usual driver version checking, 3Dconnexion suggested Object Mode van be achieved by ‘reversing the axis’ of the Blender 3D Mouse Settings but this doesn’t solve anything. The center of the axis stays at the camera’s point of view. If anything, this makes things worse, since the now mirrored mouse movements make even less sense.

Moving the mouse should not to be taken too literally. The 3D mouse can only be tilted, turned, nudged sideways, pushed away and lifted about 1 millimeter or 1 degree on each of its 6 axis. Also, it’s feels quite firm and there is no way to adjust the stiffness of the spring that holds the knob. Even after only an hour or so, my wrist began to feel tired from it. It’s quite heavy and I had no problems with the 3D mouse moving away from its position on the table. I used the USB version.

The other Blender 3D mouse

There is one more company that makes a 3D mouse. Space Control makes the 3D-Mouse SpaceController. It looks quite similar than 3Dconnexions SpaceMouse Pro model. Both cost about € 300, while the more basic SpacePilot model is about € 130 now.

Technically, the 3D mouse works with Blender and also for the Mac version. However, per default it makes the view respond like in a First Person Shooter. This is opposite from the Object Mode view that is used in the demo software and other applications like SketchUp.

Depending on your personal preferences, this may either work fine for you. It may also be impossible to get used to, even using it for days. It drove me nuts, so I send it back. Not after getting to the bottom of it and writing this article though, so at least it’s documented.